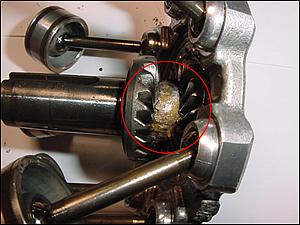 Centering ball seized due to over-heating


During normal compressor operation, the centering ball is coated with an oil film which reduces friction and allows for the dissipation of heat. The system refrigerant acts as a heat carrier and aids in the lubrication of and removal of heat from the centerball. Centerball Seizure is a catastrophic condition which results when the compressor and / or centerball is deprived of adequate lubrication and cooling. As the lubrication and / or refrigerant are depleted the friction and temperature of the parts increase rapidly until thermal distortion and parts failure occurs. This failure usually results in the centerball melting and becoming welded to the fixed gear.


Centerball seizure occurs as a result of lack of lubrication and cooling around the centerball. This condition can be caused by the following:

A) TXV blockage or Malfunction.
B) Thermostat failure.
C) No air flow to Evaporator ( Blower fan motor failure
D) Lack of refrigerant and I or oil due to a leak.
E) Lack of return oil due to too long a circuit or system undercharge.
F) Lack of refrigerant flow due to inadequate charge.
G) Blockage in system due to Contamination in system.
H) Defective centerball or gear mating surface.
1) Liquid slugging due to improper system charging.
J) Charging Liquid refrigerant into compressor (washes off oil film from around centerball).


There are 4 primary categories of centerball seizure.