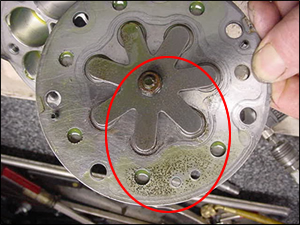 Rusted valve components due to moisture in system

Moisture Contamination refers to a failure which results from conditions which can occur when moisture is introduced into the A/C system.


The A/C compressor is designed to perform efficiently under specific controlled conditions. if contaminants are introduced into the system they act to reduce compressor efficiency, effectiveness and durability.


Moisture as used in this text refers to water in any form ( solid, liquid or gas). When moisture is introduced in the A/C system, it may combine with the system refrigerant to form an acidic solution which can erode internal compressor components. In this case moisture does not cause direct compressor failure; the failure results from the failure of a part which has been weakened as a result of the effects of rust and/or corrosion.


Copper plating is a condition in which metal parts in the compressor become coated / plated with copper. This condition is often observed in compressors which have a high moisture content in the A/C system.


One possible cause of copper plating is that as moisture (water) combines with the refrigerant, it forms an acidic solution; this chemical may then dissolve or leach copper from other components in the A/C system which are copper or contain copper-based alloys such as brass or bronze. The method by which the copper is deposited on metallic parts of the compressor (i.e. Races, Bearings, Centering ball, Fixed gear etc) is not known for certain, but this occurrence would have to be facilitated by the circulation of refrigerant, oil and moisture in the A/C system. Although copper plating alone does not cause a specific failure of the compressor, the conditions under which it is likely to occur are very detrimental to compressor durability.


Moisture Contamination occurs as a result of moisture being allowed to enter and remain in the A/C System. This condition can be caused by the following:


There are 4 primary identifiers of moisture contamination.

1. Copper Plating = The presence of copper plating generally occurs when there is a high moisture content in the A/C system.
*2.*Rust = Rust may occur on internal steel compressor components that are exposed to moisture for extended periods.
*3.*Slugged Valves = A Slugged valve is one that has been permanently deformed as a result of liquid slugging.
*4.*Contaminated Oil = Contaminated oil reflects a contaminated system.